The “State” of Higher Education

Posted on February 3, 2013 by Gregory Rosenthal | Comments Off on The “State” of Higher Education 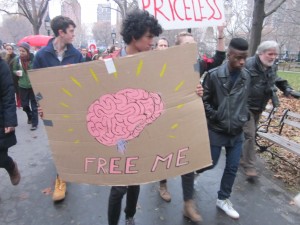 Here in New York, we are in the midst of a heated debate over “academic freedom.” The Brooklyn College Students for Justice in Palestine, a student club, has organized an event for Thursday, Feb. 7, to discuss the Boycott, Divestment, and Sanctions (BDS) movement. BDS is a non-violent movement against the Israeli occupation of Palestine.

In recent weeks, numerous ideologues and politicians in and outside of our city have come out in opposition to this event. Specifically, what many oppose is the “sponsorship” of the event by the college’s Political Science department. Others contend that even just by providing space for this event without providing equal space to those with opposing viewpoints—a spurious charge easily refuted by college officials and faculty who have rolled off their tongues the names of pro-Israel speakers invited to speak at the college—that the college administration itself, even the college president, are guilty of “endorsing” the views of the BDS movement.

The Free University of NYC has not formally weighed in on this debate. What I’d like to point out here, then, is the diversity of views that many of us hold regarding one central actor in this debate: the state. END_OF_DOCUMENT_TOKEN_TO_BE_REPLACED

Comments Off on The “State” of Higher Education