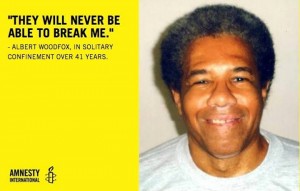 This special fundraiser event will honor the February 19 release of Albert Woodfox (the Angola 3’s last remaining member who had been imprisoned in solitary confinement for over 41 years). We will screen the film The Angola 3: Black Panthers and the Last Slave Plantation, share food, write letters to Albert and incarcerated people, and discuss solidarity inside/outside prisons. All donated funds will be given to Albert Woodfox to help his transition to freedom on the outside.

To make an online donation,  click on the “Help Albert!” link on the Angola 3 website, and specify “Albert Woodfox” as the designated recipient.

This event builds upon our December 13 event “Care Down the Walls: Education, Health, and Housing beyond Prisons” (https://freeuniversitynyc.org/2015/11/24/dec-13-care-down-the-walls-education-health-housing-beyond-prisons-free-university/)

This entry was posted in Blog Post. Bookmark the permalink.