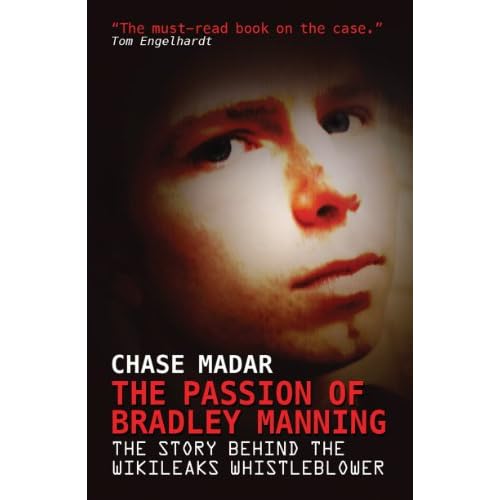 With the recent news that Private First Class Bradley Manning has pled guilty to releasing U.S. classified documents to Wikileaks in early 2010, I thought it fitting that I should come upon a free copy of a recent book about Manning in my university department’s common area. Chase Madar’s The Passion of Bradley Manning (rev. ed.; Verso, 2013) is not just a biography of Manning, but also a critical analysis of the political and legal issues related to Manning’s release of classified materials as well as the U.S. government’s torture, imprisonment, and systematic defamation of Manning.

Chase Madar, a lawyer and writer, begins his book with an introduction that explicitly calls for Manning to be awarded the Presidential Medal of Freedom. That seems unlikely; states don’t usually honor those who subvert the state. But Manning has been nominated for the Nobel Peace Prize a few years in a row now (including this year), and were he to win it, it would provide a nice balance to the “peace” prize our President won a few years back (which most good people think should be rescinded).

The second chapter of Madar’s book narrates Manning’s biography. The best aspect of this chapter is the author’s use of Manning’s own words to tell his story. As a historian, I find it tragically ironic that there is so little public information available to write the history of the post-9/11 era in the United States. Because one cannot write a history of state secrets if the government maintains the secrecy of that history. Thus Madar’s use of Manning’s own words, though we have access to so few of them, is especially important in humanizing our dehumanized protagonist.

Madar uses Manning’s own words to argue that the army private’s motives for releasing classified documents were strictly political. His intent was “conscious, coherent, historically informed and above all it is political,” Madar writes. He uses Manning’s words to describe these motivations (from the famous chat-log between Manning and hacktivist Adrian Lamo). On the release of the Diplomatic Cables, Manning wrote to Lamo that “its open diplomacy…world-wide anarchy in CSV format… its Climategate with a global scope, and breathtaking depth…its beautiful, and horrifying…and…its important that it gets out.” “It might actually change something,” he explained. Later, after admitting he sent the materials to Wikileaks, Manning wrote, “and god knows what happens now…hopefully worldwide discussion, debates, and reforms.” And in another passage form the chat-logs, Manning writes of the material: “it belongs in the public domain…information should be free.”

That last line really struck me. “Information should be free.” Manning knew exactly what he was doing. And understanding Manning’s motives are important, Madar argues, because too many journalists and politicians would rather claim that Manning was a “troubled” young man. They point to his gender identity and gender expression and to his sexual orientation as keys to why he would do something so rash as release hundreds of thousands of classified government documents. But Madar is very clear that hitching Manning’s courageous actions to his “troubled” experiences as a gay man experimenting with a transgender identity while serving in the U.S. armed forces (and this before the repeal of “Don’t Ask, Don’t Tell”) detracts from the politics of Manning’s actions while at the same time characterizing any deviation from “normative” gender expression and sexual orientation as “troubled.” Madar is right to forcefully argue that Manning’s gender identity, gender expression, and/or sexual orientation had nothing to do with his actions. We know this from Manning’s own descriptions of why he released the material (as mentioned above). And Manning even recognized this point himself: “[I’]m way way way too easy to marginalize,” he wrote.

Chapters three and four proceed to examine the nature of the leaked material: the Afghanistan War Logs; the Iraq War Logs; the Guantanamo Bay files; and the State Department cables. Madar examines the consequences of the release of these documents: on the one hand, the U.S. government has been unable to provide any evidence that the release of these files has put Americans in danger; on the other hand, the release of the files, Madar argues, provided evidence to the public of U.S. war crimes in Iraq and Afghanistan, evidence of the denial of human rights at Guantanamo, and evidence of such incredible levels of corruption among the world’s elite that Madar quotes various Tunisian revolutionaries claiming that the release of the State Department cables were essential to fueling the Tunisian revolution. Madar is careful to say that the Arab Spring didn’t need the Wikileaks releases, but that the Wikileaks releases certainly added fuel to the fire of the Arab Spring. (And note that one of the persons nominating Manning for the Noble Peace Prize this year is a Tunisian government official.)

In chapter five, Madar examines Manning’s torture by the United States. Some might question whether “torture” is the appropriate word to describe Manning’s nine-month solitary imprisonment in the United States, as well as his over-1,000-day-long pre-trial detainment, which itself is a violation of federal and international law. Madar shows that Manning’s treatment indeed fits the international standards for “torture,” but at the same time, he goes to great lengths to show that this same treatment is found all across the United States, in federal and state penitentiaries. The scary thing, Madar states, is not that the United States under Barack Obama tortured Bradley Manning, but that they systematically torture tens of thousands of prisoners a year. (And note that Madar argues the worst prison in the United States in terms of detainee torture—worse than Guantanamo—is our own Metropolitan Correctional Center right here in NYC.) The particularly sad aspect of Manning’s torture, however, was that he was placed in solitary confinement even after several psychiatrists claimed that Manning was not a suicide risk. As was later revealed in court testimony, those who were in charge of confining Manning claimed they just “decided” to torture the prisoner anyway, holding him for nine months in solitary confinement with only one hour a day allowed to exercise and all his personal belongings (including his clothes and underwear and eyeglasses) removed every evening. There are more details to his torture that I should explain here, but the infringements of Manning’s human rights make such a long list that you simply have to read the book! Just note that it was so bad that the State Department’s official spokesperson in March 2011 came out publicly that Manning’s treatment was “ridiculous and counterproductive and stupid,” and then he resigned.

The remainder of Madar’s book examines the U.S. government’s case against Manning. Madar makes clear on several occasions how Obama has reneged on his campaign promises to protect whistleblowers. In fact, he has presided over the greatest crackdown on government whistleblowers in U.S. history. And, get this, he has tried more U.S. subjects for violating the 1917 Espionage Act than every president before him combined!

At a slim one hundred and fifty pages, I highly recommend reading this book. It is not only a solid biography of Bradley Manning, and a strong case for why he deserves international recognition (such as, in my opinion, the Nobel Peace Prize), but it also a damning indictment of the United States government since 2001, especially since 2009 under the administration of Barack Obama. Madar says that despite our belief that candidate-Obama would temper the excesses of state secrecy that prevailed under George W. Bush, instead Obama has doubled down on these heinous practices.

These are troubled times we live in, and we are lucky to have heroes like Bradley Manning among us.

[This essay represents the views of its author only, and not that of the Free University of NYC.]

One response to “Book Review: Chase Madar, The Passion of Bradley Manning”