May Day in America

Posted on March 5, 2013 by Gregory Rosenthal | Comments Off on May Day in America

[The Free University of NYC was born out of calls for a General Strike on May 1, 2012.  Right now we are cooking up plans for May Day 2013, and we invite you to get involved with the planning process. See the meeting minutes and events pages on this website for more information about the planning process. In the meantime, here is a short essay on the history of May Day in America. With deep respect, Gregory.] 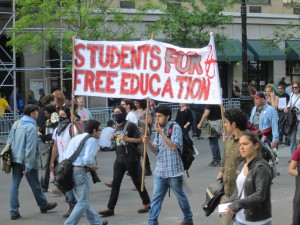 A casual internet search for news about “May Day” in New York City retrieves a New York Times article from April 30, 2012 titled “Occupy Wall Street Brings May Day to America.” The article explains that in most of the rest of the world (outside of the U.S.), May 1 is celebrated as a day for honoring the working class. In some countries it is even an official holiday, akin to our country’s late summertime “Labor Day.”

In the United States (at least since the 1950s), May 1 actually is an official holiday: it is “Loyalty Day.” No one actively celebrates “Loyalty Day,” but it remains on the books as the U.S. government’s ongoing (and failing) attempt to suppress the radical spirit of May Day.

The fact that the government went to the trouble of co-opting May 1 as “Loyalty Day” demonstrates that the New York Times was wrong. On May 1, 2012, when tens of thousands of us marched through the streets of New York (including myself), we were not “bringing May Day to America,” as if it had never existed here before. Bringing it back, yes. But bringing it “to America,” as if it is a foreign thing (and therefore unfitting for American society), absolutely not. May Day is deeply embedded in American history. When we understand this history, then we more powerfully make history (as a continuation of the struggles of our ancestors). So here are some highlights from America’s May Day history:

1886: The history of May Day actually begins in the United States. On May 1, 1886, Samuel Gompers, head of the American Federation of Labor (AFL), called for a nationwide general strike in support of the eight-hour workday. Roughly 350,000 workers participate in this strike, with 25,000 coming out in New York City alone. The strike was hottest in Chicago, where over 40,000 workers walked out. On May 3, Chicago police fired on some of the demonstrators, killing four. In response, the workers called a rally for May 4 at Haymarket Square in Chicago. Three thousand people showed up. But then, when hundreds of police showed up, a bomb went off killing seven police officers. The police fired upon the crowd, killing several demonstrators. Eight anarchists were arrested, and four executed by the state as retribution. This is the history of the Haymarket Massacre. This is also the origins of the annual memorial for the Haymarket “martyrs” that we call “May Day.”

1894: One of the worst economic depressions in U.S. history had begun the year before. It was known as the “Panic of 1893.” Millions of Americans lost their jobs. In response, demonstrations on the eighth anniversary of the Haymarket Massacre (May Day) were intense. Thousands of unemployed workers marched through the streets of Cleveland, destroying property—especially factories where they had lost their jobs—and attacking police. The New York Times called it a “Day of Terror in Cleveland.” (Interesting to compare this to the so-called “terrorists” who were arrested in Cleveland on May Day 2012. There is a long history of May Day supporters being labeled “terrorists.”) There was also, for the first time, a May Day march in the nation’s capital, Washington, D.C. Ten days after May Day, the famous Pullman Strike began, and by June that year, President Grover Cleveland signed into law an act to make the first Monday in September “Labor Day.” This was the U.S. government’s first attempt to co-opt the power of May Day.

1898: The outbreak of the Spanish-American War in 1898 sparked another resurgence of May Day activity in the United States. According to historian Howard Zinn, the Socialist Labor Party in New York City organized an anti-war demonstration for May Day, but the police shut it down before it could take place. The socialist Yiddish-language newspaper, the Jewish Daily Forward, based in the Lower East Side, however, was allowed to hold a May Day march (after they promised the city that it wouldn’t be “anti-war”).

1919: May Day returned with a vengeance in 1919 following World War I and the Russian Revolution. In 1917, President Woodrow Wilson had signed into law the Espionage Act (extended by the Sedition Act of 1918) to censor anti-war press and arrest anyone engaging in anti-war demonstrations. Even after the war’s end, the law was still applied to arrest and deport radicals, including over five hundred immigrant activists who were forcibly deported during the Red Scare of 1919. The Russian Revolution, which began in 1917, inspired workers in the United States to believe that their own revolution was at hand. In the midst of this apparent revolution and the U.S. government’s crackdown on all forms of dissent, May Day in 1919 blew up. Earlier that year, as many as 100,000 workers in Seattle had walked out on a five-day general strike. On May Day, demonstrations were held across the country. In Cleveland, the police were called out to repress a demonstration of workers and activists; two persons were killed. In Boston, demonstrators clashed with police; one police officer was killed. In many cities, police acted aggressively and preemptively to intercept radicals and make arrests (and confiscate items like red flags) before May Day celebrations could proceed. (Sound familiar?) Meanwhile, anarchists mailed over thirty bombs to be delivered to prominent politicians and capitalists on May 1; thankfully, almost all of the bombs were intercepted by authorities before reaching their targets. Perhaps this was the most militant May Day in American history. Its legacy was great: the Red Scare and the infamous Palmer Raids were born out of these events, and…

1921: …in response to the radicalism of May Day, some conservatives in the United States began celebrating May 1 as “Americanization Day.” (This would ultimately become the state-sanctioned “Loyalty Day” mentioned earlier.) Like the New York Times article in 2012 that insinuated that May Day was a foreign holiday “brought to America,” the idea behind “Americanization Day” was to paint May Day as the product of immigrant workers bringing to the United States their radical ideologies. This was the virulently anti-foreigner 1920s that we often fail to remember: the resurgence of the KKK, and the passage of some of the most restrictive immigration laws in U.S. history, including the 1924 National Origins Act which targeted Southern and Eastern Europeans (like Jews and Italians) who made up the bulk of America’s (and especially New York’s) radical working class.

1946: In the 1920s and 1930s, American communists began to host regular May Day celebrations in New York’s Union Square. In 1933, Dorothy Day sold the first-ever copy of the Catholic Worker for one penny at the May Day rally at Union Square. There were no May Day demonstrations permitted during World War II (but that doesn’t necessarily mean they didn’t happen). Then, on May 1, 1946, May Day came back. As many as 60,000 marched in New York.

1948: However, in the rising anti-communist atmosphere of the early Cold War, U.S. government institutions began clamping down on May Day celebrations once again. New York City officially declared May 1 “Loyalty Day” in 1948 (a decade before it became a national holiday).

1953: New York City banned May Day parades altogether. (Part of the U.S. anti-communist agenda of the Cold War.) But still thousands came out at Union Square to protest the U.S. war in Korea.

1968: During the late 1960s, student activists became more involved in May Day celebrations across the country. New York City students joined the May Day rally at Union Square to demonstrate against the university-military-industrial complex. Meanwhile, in Chicago, three days after May Day, on the eighty-second anniversary of the Haymarket Massacre, young anti-war protestors vandalized Haymarket Square’s policemen’s memorial. (And, the following year, the statue was blown up by the Weathermen during the famous “Days of Rage.” And then it was rebuilt and blown up once again in 1970!)

1986: The centennial anniversary of the Haymarket Massacre. Pete Seeger and allies organized a series of national events to commemorate the one-hundredth anniversary of May Day. (But it is hard for this historian to know exactly what happened, as May Day was overshadowed by the news of the Chernobyl Disaster in the Soviet Union, which occurred just days before May 1.)

2006: The Great American Boycott / El Gran Paro Estadounidense. Hundreds of thousands of undocumented immigrant workers in the United States held a one-day general strike, skipping work and school to march in the streets against proposed anti-immigrant legislation. The day was billed as “A Day Without Immigrants” (this is the origins of May Day 2012’s slogan, “A Day Without the 99%”). The May 1 Coalition in New York City was born out of this nationwide strike. Since 2006, the May 1 Coalition has organized the annual May Day rally at Union Square. The number of participants in 2006 was astounding: at least 400,000 marched in Chicago; another 400,000 (or possibly one million!) marched in Los Angeles; an estimated 200,000 marched in New York City.

This rather brief and incomplete history of May Day in America proves that May Day in 2012 was nothing new. And nothing foreign, either. May Day was born out of the struggle for the eight-hour workday in the United States. May Day was born out of citizen protest against police violence in Chicago and against state-sanctioned violence against political prisoners. May Day was born out of American anti-war struggles, from the Spanish-American War to World War I to Vietnam to today’s“War on Terror.” May Day was born out immigrant workers’ fight for equality, not just since the Great American Boycott seven years ago, but since 1886. Immigrants have always been at the forefront of the American labor movement. May Day is neither just about workers, nor just about immigrants, but it is also about students. Since the 1960s, and through 2012 (when the “Free University” was held at Madison Square Park) and, we hope, beyond, students have also been at the forefront of organizing May Day demonstrations across the United States.

Building upon this history, we are poised to make history in 2013 and in the years to come.

This entry was posted in Blog Post and tagged history, may day. Bookmark the permalink.